Biography: I began playing oboe the summer of 5th grade, so I've been playing for about 6 years and I've studied privately for 3 years. I joined Wisconsin Youth Symphony Orchestra last year, and I’ve been in WSMA State Honors Ensembles for 3 years, playing principal oboe both my 2nd and 3rd years. I received honorable mention in the Milwaukee Symphony Orchestra's 2018 Stars of Tomorrow Concerto Competition, earning me the privilege to play with the MSO in a side-by-side concert. I've gone to state for WSMA Solo and Ensemble for the past 2 years, and I played on Wisconsin Public Radio's "The Midday Show" with my woodwind quintet. I'm also active in my school's theater program, playing oboe/English horn in the pit for the past 3 years.

One of my other hobbies is music composition. I've received 3rd and 4th place awards in WSMA's State-wide Composition Project. Another interest of mine is singing, and I've participated in multiple honors choirs, such as WCDA's All-State Choir and Badger State Honor's Choir. Outside of music, I learn Japanese in my free time and I play with my three cats.

Favorite oboe memory: Last year, when I played with WSMA's State Honors Orchestra we played Rachmaninoff's "Symphony No. 2, Movement 3" (the melody from this movement was used in Eric Carmen's "Never Gonna Fall in Love Again”), and I played the beautiful English Horn solo. The piece was so emotional that some of my friends said they even cried while playing it! 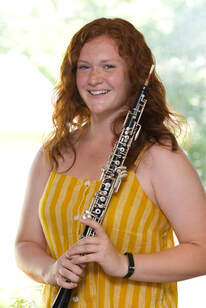 ​Biography: I have played oboe since 2015 (4 years) and I have taken private lessons since then. I have also taken six years of private piano lessons and four years of private horn lessons. I’ve gone to WSMA State Solo and Ensemble for the past three years for both oboe and horn, as well as small and large ensembles. I have played in my school’s full orchestra and top jazz band since freshman year, and since sophomore year I have played in the top wind ensemble. This past year I helped teach small groups at Kromrey Middle School. Each fall I play mellophone in my school's marching band, and this year I’m section leader.

I’m very involved in soccer, and have played for a competitive club since I was five. My team plays all over the Midwest for league games, and some of my favorite places we’ve traveled to are Memphis, Fort Lauderdale, and Denver. My family enjoys camping, and every summer we go on a road trip to a new camping destination. Recently we have gone to Jasper, Acadia, and Rocky Mountain National Parks. In my free time I love reading and enjoy playing with my cats and dog.

Favorite oboe memory: My favorite oboe memory was during Solo and Ensemble my freshman year. I had felt comfortable in my preparation and practice for my solo, but I was still nervous. My fingers were a little sweaty and I could feel them slipping on my oboe. This only made me more nervous, but as soon as I started play my nerves went away. All of my other thoughts went away. I ended up playing my solo better than I had before, and I was very proud of myself.